So Wrong 2 by Michael Wagner and Wayne Bryant: Review


Hi folks,
I have another great book review to share with you. 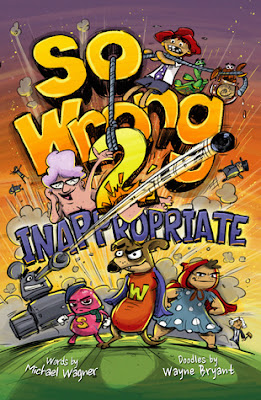 Michael Wagner and Wayne Bryant are back with So Wrong 2 and it appears they’ve learned NOTHING from their previous mistakes. With a fresh cast of inappropriate characters, including:
Nan the Forgetful Nudist,
Warren the One-Legged Wonder Dog,
Steve McSpleen (a real human spleen),
BIG Red Riding Hood
and Tomas the Tank,
there was never really any hope that this book would turn out sensible ... or reasonable ... or even tolerable. And it’s lived up to all expectations.

We loved So Wrong to bits...

If you are interested you can read my Goodreads Review

So Wrong 2
Did not disappoint.

My six year old had her nose buried in it for quite a few nights, which is a clear sign of a hit.

Once again we have the ever phonetically verbose Mitey Mikey with his life wisdom. My daughter did announce that she was smarter than Mikey, because he can't spell... he he, how humble they are with their youthly wisdom.

Our favourite character is Warren the One-Legged Wonder Dog. I won't spoil it for you, but the little guy has guts and, well, only one leg, but his tail makes up for what he lacks in traditional appendages.

Once again Michael has poked fun at some rather illustrious classics with wit and humour that keeps getting better. Our favourite add break was Body Parts R Us, and I am keen to put some So Inappropriate tips into action, so look out at the next wedding, or perhaps hospital visit for some wildly inappropriate behaviour...

Wayne Bryant is a master at hilarious depictions of Michael's words. What a humourforce (I made that word up, if Mitey Mikey can, so can I...) they've become.

The verdict is in! This is going to be another book that reluctant and confident readers will gobble up.
We can hardly wait for a third installment...

Michael Wagner is the Melbourne-based author of more than 70 books for children which include the much-loved Maxx Rumble series, six funny and heart-warming stories about a family called The Undys, the best-selling picture book Why I Love Footy, and many more.
Before becoming a children’s author, Michael worked for ten years as radio broadcaster with the ABC, wrote and produced award-winning television animations, and penned everything from advertising copy to songs and comedy. He’s also the founder of Billy Goat Books.
You can find out more about Michael from his fun and revealing website.