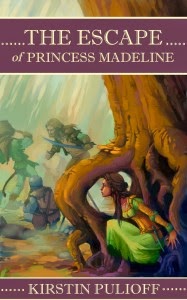 http://amzn.com/B00A1Y87P0
DESCRIPTION FROM AMAZON:
The Kingdom of Soron is known for many things, its rolling landscape, haunting history, fiery sunsets, and its beautiful princess. Princess Madeline woke on her sixteenth birthday to realize that her future had been planned out, a life full of privilege, royalty, and boredom... a life with a husband and knight champion that she did not choose. Using her charm, strength and stubbornness, she defies the King at every turn, determined to keep her freedom on her terms.

Freedom quickly turns to disaster as she finds herself seized by a group of wandering bandits. With the kingdom in turmoil over her capture; her Knight Champion eager to prove himself, a group of dedicated suitors determined to win her hand, and a group of exiled wizards join forces in the hunt to rescue her. Follow Princess Madeline in this adventure full of twists and turns as she tries to find her freedom and answers to her questions about life and love.

Poor Madeline finds herself in an impossible situation. Her 16th birthday approaches and she is expected to marry. Although she is a twin, her brother is not at all expected to marry, which of course creates quite a disparity between the siblings. That kind of double standard would be enough to cause siblings with the best of relationships to falter of that I am certain.    Her father prepares a celebration for her betrothal, and many willing suitors attend in anticipation of the young girls decision.

Madeline's world implodes when she makes a rash decision to leave the safety of the castle, her father the king and brother.  She is captured not long after, and now the very thing that Madeline is running from, is the only thing that may be able to provide her salvation.
When the king discovers Madeline has fled her responsibilities, he is distraught, and will do anything to get her back, even promise her hand to one of the most creeper suitors in the land Prince Paulsen.
Enter a young knight called Daniel, determined and somewhat smitten with Madeline. Each will stop at nothing to find her.
Meanwhile, Madeline isn't helpless, she formulates a plan of escape, which isn't very successful but it was a very good attempt.
When Prince Paulsen's men catch up with the bandits that have captured Madeline, the young girl is bound and gagged, but she manages to secret away, amidst the fight. Finding, only her gown, Prince Paulsen returns to the king with the dreaded new that Madeline is lost to him forever.

Daniel, however, will not give up. He searches and finds her, and brings her home, but not without a club on the head in the process. Madeline, realises, what Daniel has done for her, and would do for her, and her heart begins to open like a rose of first love.
Madeline returns to the King and is welcomed with open arms. She chooses Daniel as her intended, and thus ends the tale and begins the further adventures of Princess Madeline.

I enjoyed this very sweet tale, which felt a mix of a  coming of age, parable of the lost sheep and the prodigal son/daughter.
Madeline's character development was lovely and reminded me also of another book that I loved when I was a teen,  "Chatain's Guardian (Annals of Lystra) by Robin Hardy.

I do feel that his is perhaps an early Young Adult read as I don't feel many 9-12 year olds would be yet interested in the very appropriate love story, but ages 13-16 would find this completely endearing.

My bottom line, I give it 4 stars and am looking forward to the further two books.


About the Author: Kirstin Pulioff

Kirstin Pulioff[/caption] Kirstin Pulioff is a storyteller at heart. Born and raised in Southern California, she moved to the Pacific Northwest to follow her dreams and graduated from Oregon State University with a degree in Forest Management. Happily married and a mother of two, she lives in Oregon, and enjoys being a stay at home mom. When she’s not writing, she is busy with her kids and church.

Prize: $25 Amazon Gift Card or PayPal cash (winner’s choice) Contest runs: January 13th to January 31st, 11:59 pm, 2014 Open: Internationally How to enter: Please enter using the Rafflecopter widget below. Terms and Conditions: NO PURCHASE NECESSARY TO ENTER OR WIN. VOID WHERE PROHIBITED BY LAW. A winner will be randomly drawn through the Rafflecopter widget and will be contacted by email within 48 hours after the giveaway ends. The winner will then have 72 hours to respond. If the winner does not respond within 72 hours, a new draw will take place for a new winner. Odds of winning will vary depending on the number of eligible entries received. This contest is in no way sponsored, endorsed or administered by, or associated with Facebook. This giveaway is sponsored by the author, Kirstin Pulioff and is hosted and managed by Renee from Mother Daughter Book Reviews. If you have any additional questions – feel free to send and email to Renee(at)MotherDaughterBookReviews(dot)com. a Rafflecopter giveaway